Some nights after receiving the game trail camera.

The window next to my bed is slightly open. Outside, some sort of creature emits a high-pitched wavering call. Both the cat and I come awake. My heart races and pounds in my chest.  Milo sits up; his orange paws press into my stomach, and he turns his ginger head toward the window. Again the wistful cry.

Whatever is making that sound, I know it’s not coming from the donkeys. They are okay. So, I quickly go through every other animal sound I know that might call at night: could it be a great horned owl, barn owl, cat, goose, heron, coyote, or wolf? Yet, none of these animals create a sound like the one I’m hearing now.

Milo jumps down, as I slip out from under the covers. We both head for the window overlooking the lower meadow. For now the sound is coming from various locations as though the bird is flying over the land and crying.

The night is dark, and though the farm is completely covered in deep reflective snow, the moon is thin, and what light there is casts a bluish wash over the white.

The idea of a flying bird stills when I spy huge forms standing below the greenhouse and ringing the broad three-foot high Woods’ Rose hedge.

The silhouettes are a group of female elk accompanied by a bull with magnificent branching antlers. Each black point of his crown pierces the eerie light.  The bull’s heavy head swivels as he looks round toward his companions.

The females utter the unusual cries. I count seven cows. The melody is strange and flutelike. An enchanting sound drifting from such a large lumbering animal. I expected a slender bird flying and gliding, twisting and banking in the blue-white light.

The bull moves past the rose hedge and out of my vision. While a few cows stand stock-still, others take tentative steps –pause– then walk on.  They move stealthily as though concerned by their closeness to the barn.

Then I hear a scream, like that of a terrified horse. It comes from the upper prairie where the bull must be now. He’s calling the females and urging them to come. They don’t seem to pass more quickly though, but they are heading in his direction.

Tonight’s night visitors have given me a glimpse of what moves on the farm after dark.  We have seen some evidence of elk such as their scat and hoof prints, but they come down from the high lands at night, and I have never spied them during daylight hours.

I can see how my Christmas gift, the small camouflaged pail, the game trail camera, will reveal all our night visitors, if we can just find the right places to set the camera up. 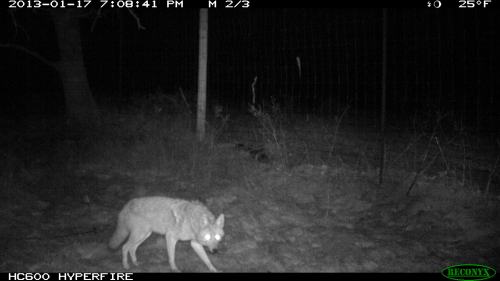