One late morning I walked down to the garden to pick some tomatoes. This is the second year I have grown my tomatoes in four-foot tall cast off fruit bins from the local orchards. These bins make terrific raised beds for an upright gardener like me, since I don’t need to bend over for planting, weeding, or harvesting.

A friend of mine who lives in the forested foothills of Mount Adams in Washington uses over twenty of these fruit bins to grow all sorts of vegetables.

But my climate and conditions are different from hers, and I recently discovered a serious down side to gardening in these containers.

The bins have a heavy black liner that sits inside the container. The liner doesn’t lie flush up against the box; and so, in many sections there are gaps and spaces between the liner and the box. These spaces provided the perfect home for yellow jackets to build their nests, and by late summer the seven boxes had over twelve nests encircling the tomatoes and my bee-feed flowers. I didn’t know this until that morning I went down to pick some tomatoes, and I approached a plant. I saw six yellow jackets milling about on the lip of the container, but didn’t think anything of it until I reached in to pick another ripe tomato, and a yellow jacket zoomed from the nest entrance –shooting like a bullet and struck my arm. It stung me, and rocketed away. I screamed and dropped the basket of tomatoes I was holding. The intention behind that targeted attack stunned me.

Until that moment I had viewed yellow jackets as annoying but beneficial creatures. Like the turkey vulture they devour dead animals and clean up the environment. For all picnickers know how yellow jackets like meat and these insects will persistently try to attach themselves to a burger or a slab of grilled salmon. I knew they were obnoxious in this way, but I did not realize they would purposefully sting me. Later, I also discovered they are highly territorial around their nests. 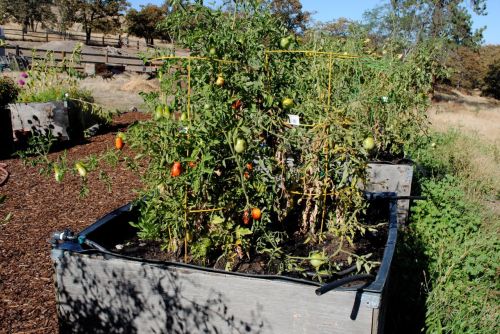 Bruce suggested we approach the garden at night when the yellow jackets are calm and saturate the areas between bin and liner with wasp poison, but this presented a problem for me. Wasn’t I growing my lovely bee-feed garden to provide nectar for the pollinators and to attract predators for the pest insects that cause problems in vegetable gardens? And, I had bees and insects of all sorts coming to those flowers. And further research showed me, “despite having drawn the fear and loathing of humans, yellow jackets are in fact important predators of pest insects” (Akre 102). I felt it was impossible to spray the area to kill these wasps.

For five days my arm puffed up due to an allergic reaction, and it itched like crazy. Consequently I stayed far away from the tomatoes.

Later I compromised and picked some of the tomatoes at night when the predatory yellow jackets were quiet, and then I picked a big load of green tomatoes (as a farewell) and fried some up while using the rest for a green tomato sauce, which I poured into eight pint containers and placed in the garage freezer.

Next year I either get rid of the bins or change to 18” – 24” raised beds like most people have, or I fill all the gaps completely with insulation, so the yellow jackets cannot build nests. That is if I have the heart to try growing tomatoes for a third year when I can easily buy them and in large quantities for canning at the local farmers’ markets and fruit stands. Still if I do this, then I don’t have the satisfaction of knowing I have overcome the many obstacles of a novice tomato grower. Being a “give up gardener” might mean the fruit stand tomatoes don’t taste quite so sweet.

15 thoughts on “Tomatoes and Yellow Jackets”