It was 7 a.m., and I walked into the kitchen to make some hot tea. I looked down toward the barn, and I saw a large, fuzzy red brown figure near the tack room. I didn’t have my glasses on, so I grabbed the binoculars sitting on the counter, and sure enough, it was a mule. And, then two more moved into view.

I said in the direction of the bedroom, “Bruce we’ve got three mules at the barn again.”

Seems to be a yearly occurrence; the neighbors’ gate gets left open or pushed down, and some of the mules come onto our property. Except this time something was very different about two of these mules.

I went back into the bedroom and changed into my barn clothes, and then went into the kitchen to pick up my mug of brewed tea. Just then I saw the donkeys running across the lower pasture. How did they get out of their paddock?

Normally I bray to my donkeys to get them to come, but this time I yelled their names, because I was afraid a bray might excite the mules in some way. The donkeys came running up to the house. I screamed for Bruce when I saw Chippo’s eye. Blood was pouring fast over his right eye. It seemed the eye was gone. Then I realized he had bites all over both sides of his neck, his right flank, and his rump. Somehow just minutes before he had engaged one of those mules in a fight.

Although Ziggy is the dominant donkey and a social extrovert and often Chippo is reticent and less socially confident, Chippo, inexplicably, is the herd and property protector. He’s the donkey that will challenge a dog or a coyote if it approaches whereas Ziggy just watches and lags behind.

I threw a rope around Ziggy’s neck, and led him into the fenced pasture around the house. And, as is often the way of a subordinate donkey, Chippo followed.

I ran over to an open window and called again for Bruce. I wanted him to see Chippo’s injuries.

Just then one of the mules came trotting out from the back of the barn, and he began running along the fence where we were standing. He was intent on the donkeys. The mule was acting strangely; I kept yelling and waving a cloth, and all three dogs were barking at the mule, but the huge animal paid no heed. I could see the other two mules were inside the donkeys’ paddock. I thought this mule is going to jump the fence and try to attack the donkeys again. The creepiest aspect of those few minutes was the mule- he was simply not put off by anything we were doing. Though Gypsy seemed to think it was a game, and Ouzel was afraid, Skookum my male dog was completely on-step. He was barking full tilt and matching the mule pace for pace along the fence, which impressed me, because Skookum had just been neutered, he wore a big floppy cone on his head, and he had stitches along his groin.

I was also running along the fence line yelling at the mule while the donkeys stood watching from the middle of the field.

Eventually the mule moved back toward the barn and the other mules. Bruce went down to the barn and found the gate to the donkeys’ paddock collapsed inward, and the gate had been pushed in the wrong direction about 7 seven feet. The John mule (male) was apparently defending a Molly mule (female) that was in heat, and the John decided the donkeys were a threat, so he put all his weight and determination into breaching the gate. Then the fight began. Somehow Ziggy and Chippo escaped without being killed.

I later found deep mule sized hoof marks in the back of the paddock. We think it is remarkable the donkeys had enough presence of mind to run out the small opening provided by the breached gate, when they so easily could have been trapped in the paddock or their stall.

Soon after the mule retreated to the barn and “his females,” I was able to inspect Chippo’s eye. It seemed it was not the eye, but the eyebrow had been lacerated. He seemed to have vision. The bleeding had slowed, but I was still uncertain about the extent of the damage to his body overall.

Bruce got on the phone and eventually contacted the mules’ owner. He came once again to get his mules. He has over twenty and about half of those mules live on property that abuts a small section of our farm. He promised to take them today to another farm, and he agreed the John Mule “is a problem.”

“They are being sold to a person in Montana, so they won’t be back.”

Of course he was very sorry and worried about Chippo. He said while on his way over he imagined a broken neck or broken leg, and I guessed this is often the injury for an attack like this.

Apparently an unneutered John Mule has testosterone even though he does not produce sperm, but he will act like a stallion. Stallions will use everything they have – front feet, back feet, and their mouths to “defend” their females. Once I realized what we were dealing with, I understood, and so did Bruce it was very fortunate Chippo, our little donkey, was alive.

Our vet was unable to come, and although we had an appointment at a vet about 30 minutes away, we decided not to try putting Chippo in the trailer, because he was so stressed already. Bruce examined his wounds closely, and determined the eye was probably not affected, and that the other wounds would heal as long as they remained uninfected.

Bruce and his hired hand spent the rest of the day bending the gate back together and reinforcing both gates into the donkeys’ paddock with steel rods and heavy chains and bolts. Plus, they raised the gates, so they would prove more formidable to such a tall animal.

We’ve thought about coyote and cougar attacks, but it never occurred to us that an animal as powerful and big as a Kodiak bear would want to get in and threaten the donkeys. Bruce said Chippo was a “hero,” because he kept Ziggy from being injured, and because both donkeys were able to leave the paddock with their lives. 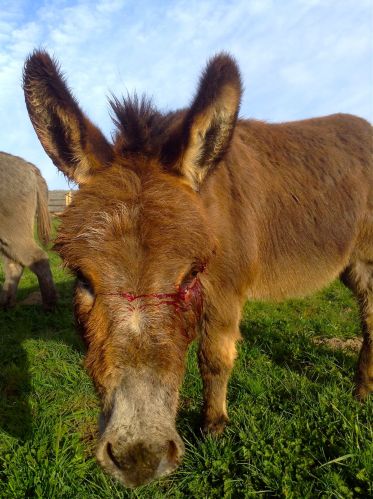 Note: Day Two – we think Chippo’s wounds are healing. We will know more in a few days. Both my son- in- law and a best friend from Alaska wondered if we thought about shooting the John Mule. The idea of shooting the animal never crossed my mind; I guess things happened too fast.